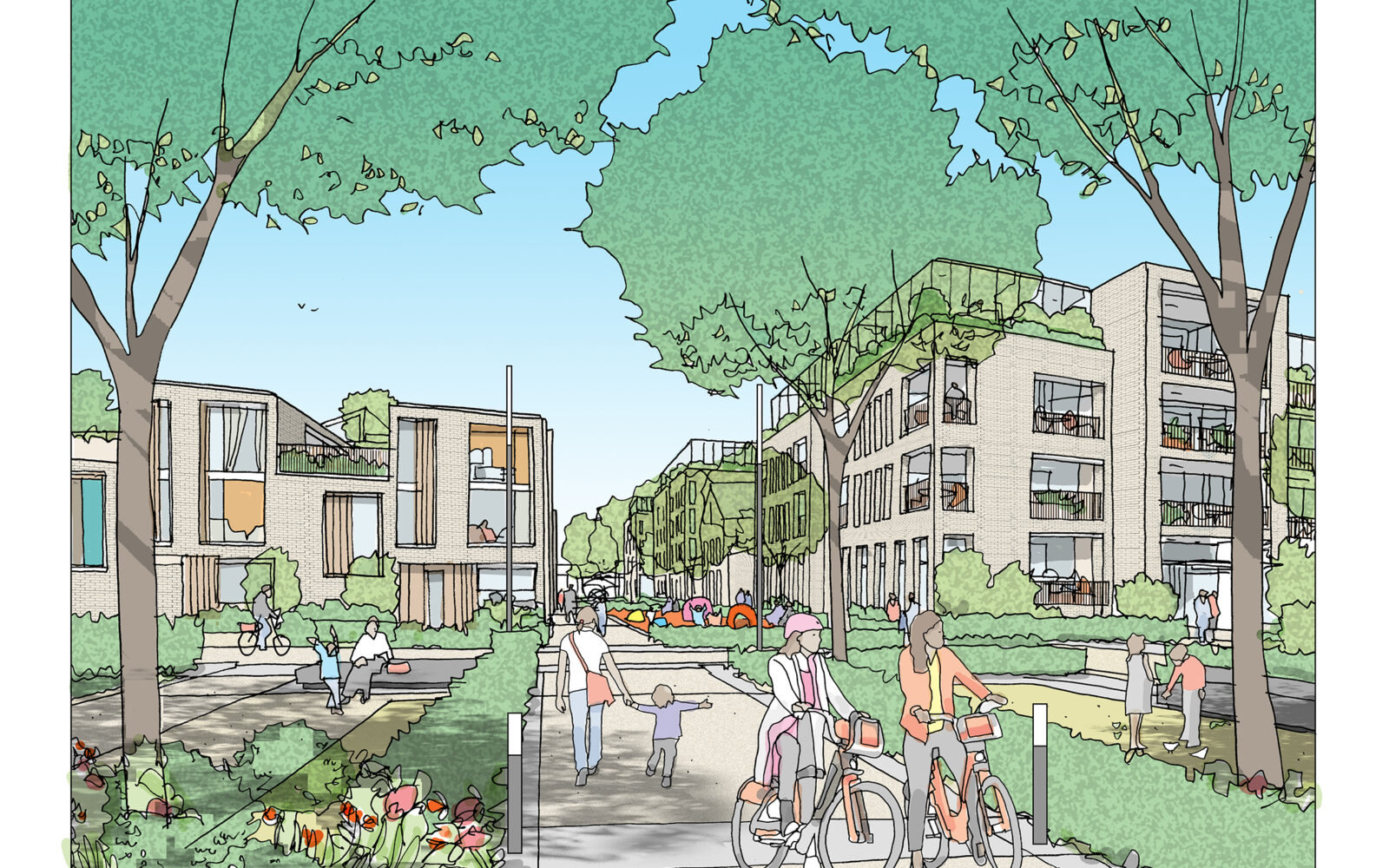 The Rebirth of the High Street

There’s nothing new about the high street. That’s partly because it’s a concept which allows for constant changes in the way we design towns. It doesn’t even have to refer to a specific street: as a concept, “high streets” peaked in Victorian Britain as the social and retail hub of a town community, and while those communities have changed a lot since then, the way we understand high streets has evolved and shifted with them.

Of course, it’s easier to see the end of one way of life than the beginning of the next. And while there’s endless talk about the “death of the high street”, those conversations haven’t magically appeared over the last few decades. As we emerge into a post-pandemic (or, less optimistically, late-pandemic) landscape, it’s worth taking a closer look at whether the high street really is dying, or whether it’s simply undergoing one of many, many metamorphoses in its long history.

The Death of “Stuff”

The crash of 2008 played a major role in the changes we’re seeing today, and started the shift from high street shopping to out-of-town retail parks and online clicks – and even combinations of the two. Retail parks not only offer a high proportion of “essential” retailers near road networks, but can also act as supply chain hubs for click and collect purchases. And if out-of-town land was cheaper than in the city centre, the internet was cheapest of all: websites could easily compete with large stores such as Debenhams and Topshop which needed expensive physical space, and when these stores closed, the high streets left behind began to feel more and more desolate.

When you add to this the recent impact of the Covid pandemic – which caused a significant jump to online sales as society went into lockdown – the trend is clear. The pandemic has changed behaviour in other ways, too. It’s accelerated a shift in people’s attitudes, as they start to care less about “stuff” and more about “self”: experiences, connections, lifestyles. Consumers are more aware of their consumption. They shop more consciously, moving gradually away from fast fashion towards sustainable behaviours that support localism and the environment.

Localism isn’t just a reflection of environmental concerns: working from home has connected many people with their communities in a way that wasn’t possible before. A large proportion of the lunch and post-work economy has already moved away from city centres and into local high streets, and in the long term this could stabilise at around 20%. These smaller community hearts have lower rental overheads, opening up opportunities for independent retailers. And while these smaller businesses have variable success rates, their turnover when they find that gap in the market shows that high streets – the small and suburban perhaps more obviously than the large and central – can adapt to change.

So what about the city centres left behind – those emptied-out shells where our high streets used to be? Clearly, the best response is not to bulldoze everything and start from scratch. And while it’s not possible to adapt all our buildings to meet changing demands, the challenge of doing so can open up previously unthinkable opportunities, covering uses from housing and healthcare to schools, universities, and new kinds of workplace.

In fact, we can think of this as a return to the diversity which made our high streets so robust to begin with. The government, short-term business interests and planning policies have conspired for years to hollow out our once-liveable town and city centres, replacing them with monocultural shopping or working “zones” which become inactive (and even unsafe) at different times of the day, week or year. Smaller towns and villages are now benefitting
from their commuter residents now staying put, but it’s going to take time and creativity from a wide range of stakeholders to adapt the city centres left behind. Bringing diversity back to the decision-making table is key. If there’s one lesson we’ve learned during the pandemic, it’s that people form the basis of our economy – and that by acting together and thoughtfully listening, we can create and value places that reflect our diverse needs.

The government clearly understands this issue, even if they seem a bit stumped on how to solve it. Their proposed planning reforms earlier this year – which would streamline planning laws to help with changes in use – have now been abandoned, due to problems caused by a lack of engagement with the very communities they’re supposed to serve. Similarly, “levelling up” or “welcoming back” funds have often failed to target the towns which need the money most. But these are arguably steps in the right direction, and they show a growing awareness of the ways in which better public realm and more green spaces can combat feelings of isolation. Investing in these types of spaces is sure to have a positive impact in the long term.

At ADP, we’ve seen both the challenges and the opportunities facing our public spaces. However, more and more councils are embracing a new future for our high streets. We’ve recently been working with Southend-on-Sea Borough Council to develop a concept that rethinks hierarchies of use – the often unwritten rules that shape our priorities when designing spaces. By removing a section of the long, linear retail area that dominates Southend’s high street, and
replacing it with spaces more oriented towards experiences and leisure, the designs open up a “heart space” right in the centre of town.

This kind of approach benefits from multiple perspectives, and we’ve brought together our commercial, residential and landscape specialists to consider every opportunity. The result is a new town centre park, putting a distinctly modern twist on the Victorian pleasure garden. Flanked with urban homes and offices – to avoid the trap of creating a space that prioritise one time of the day, week or year – it also connects the Forum, a building ADP delivered a few years ago, with the Focal Point Gallery.

Those connections – between people and place, between different types of industry or community – are what make towns, cities, villages and suburbs great. They’re what make them human. There’s nothing new about the high street: it’s always been a space for reinvention and rebirth, and for reflecting the incredible diversity our urban landscapes have to offer.

You can download a copy of this insight here. 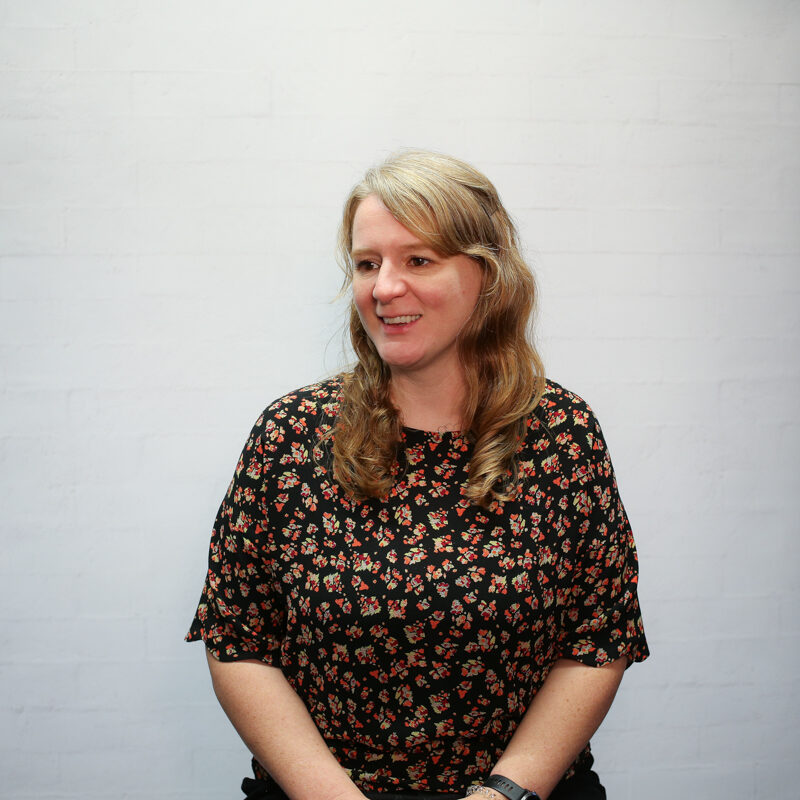 Claire is our Head of Landscape, and a chartered member of the Landscape Institute.

Her experience ranges from public realm projects to landscaping for schools and universities. Claire enjoys all aspects of her job role, but is particularly interested in biodiversity and sustainability – she loves getting other people enthused about these topics!

She is also a visiting tutor on the Landscape Architecture course at Birmingham City University.

In her spare time, Claire enjoys parkruns, playing the piano, working on her allotment and singing in her community choir. She also sits on the board of trustees at Moseley Park and Pool, a Humphry Repton landscape in Birmingham. 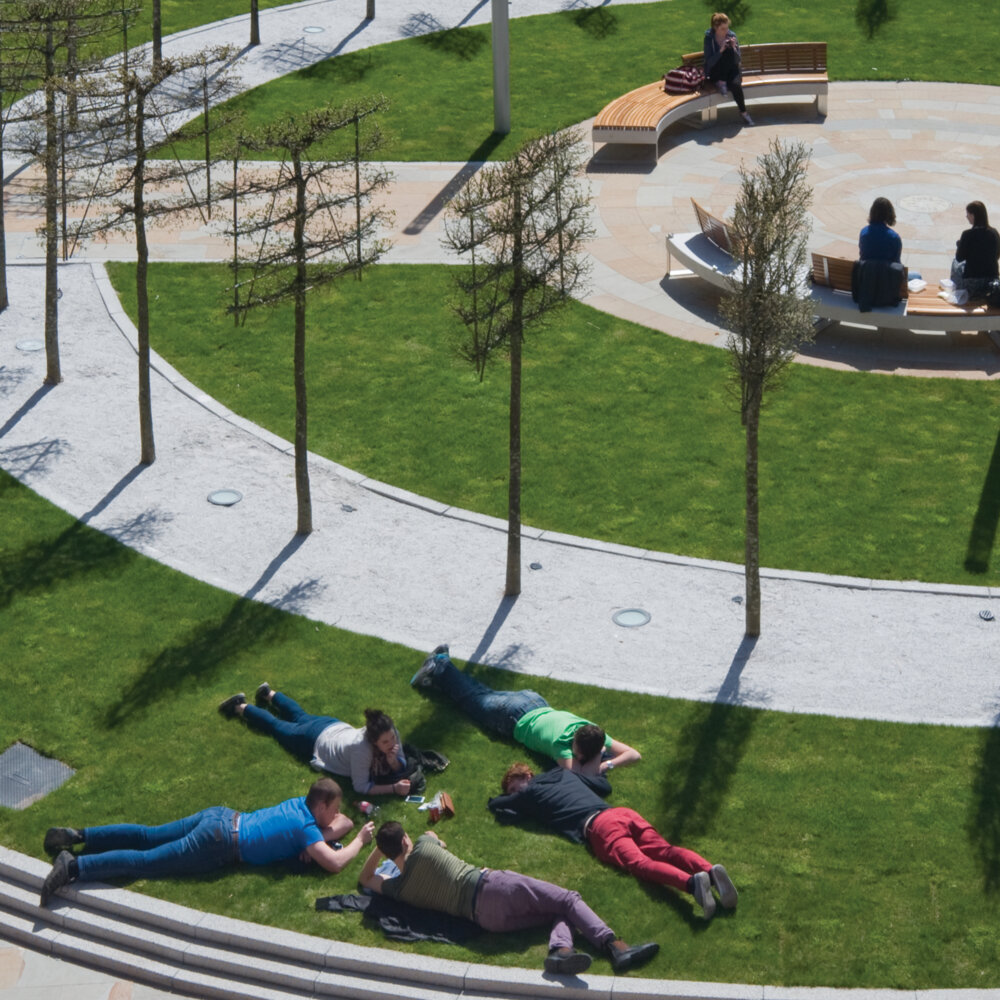 The University of Liverpool appointed our landscape team to design a new quad, transforming an unloved car park into a lively gathering place. The Jubilee Quad would be a focal point for the city’s “Knowledge Quarter”, and needed to be robust enough to withstand a good deal of foot fall from the University and wider […] 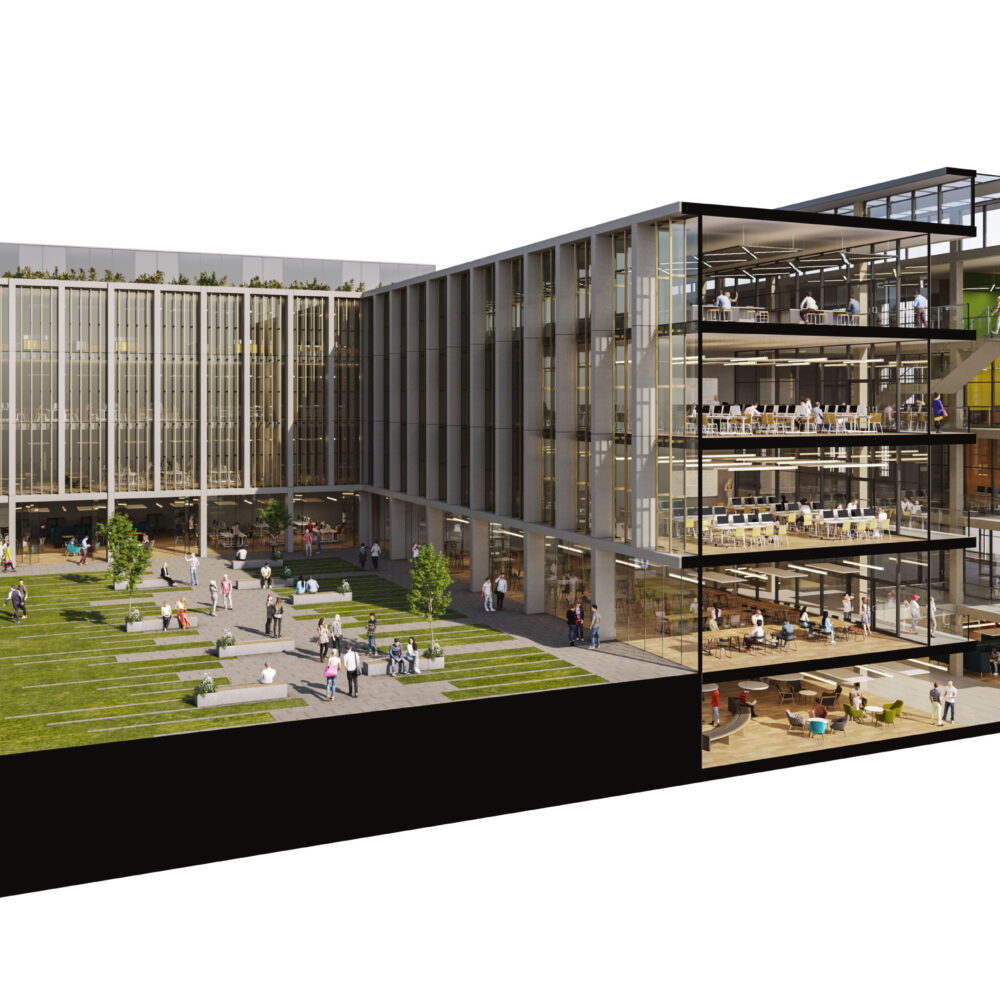 Repurposing for Education With COP26 happening and having spent my half term reading Greta & the Giants to my girls, we all need to take control. As Greta says in the book, “Climate change is the biggest crisis humans have ever faced.” If we’re going to save our planet for future generations, we need long-term […] 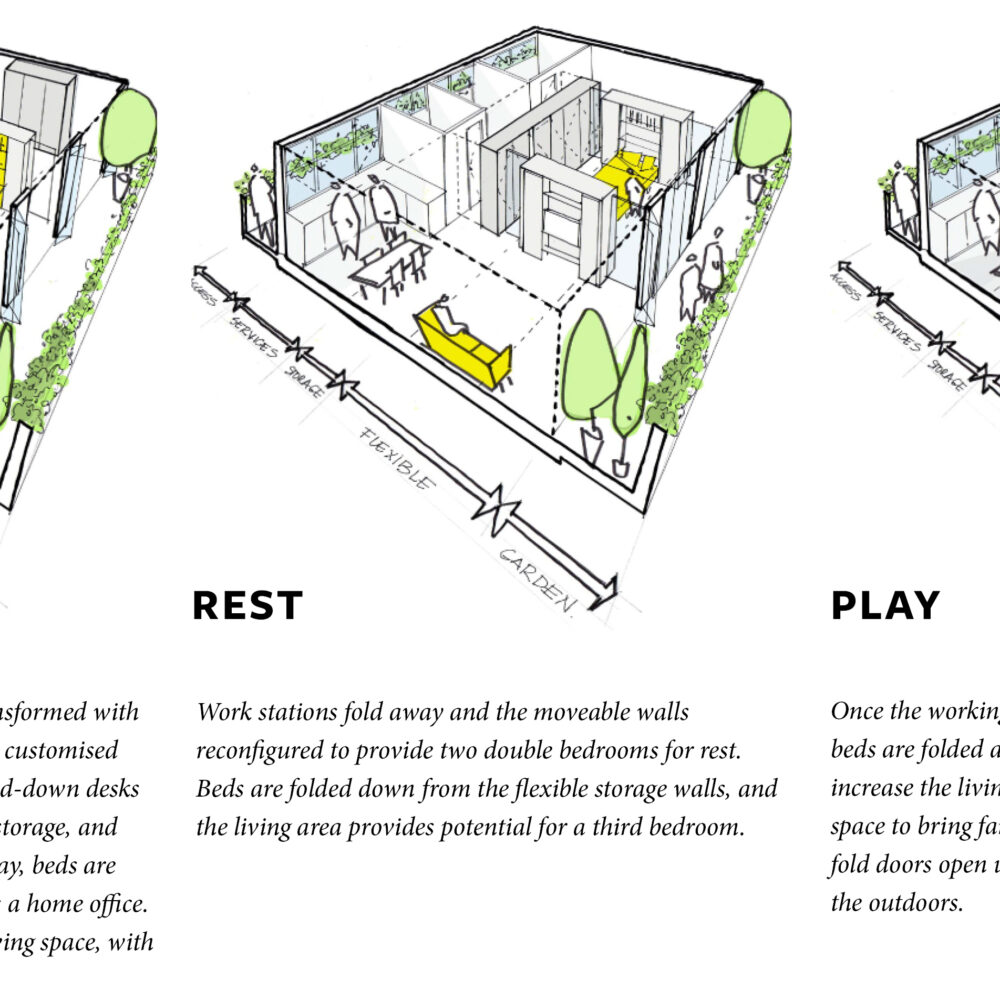 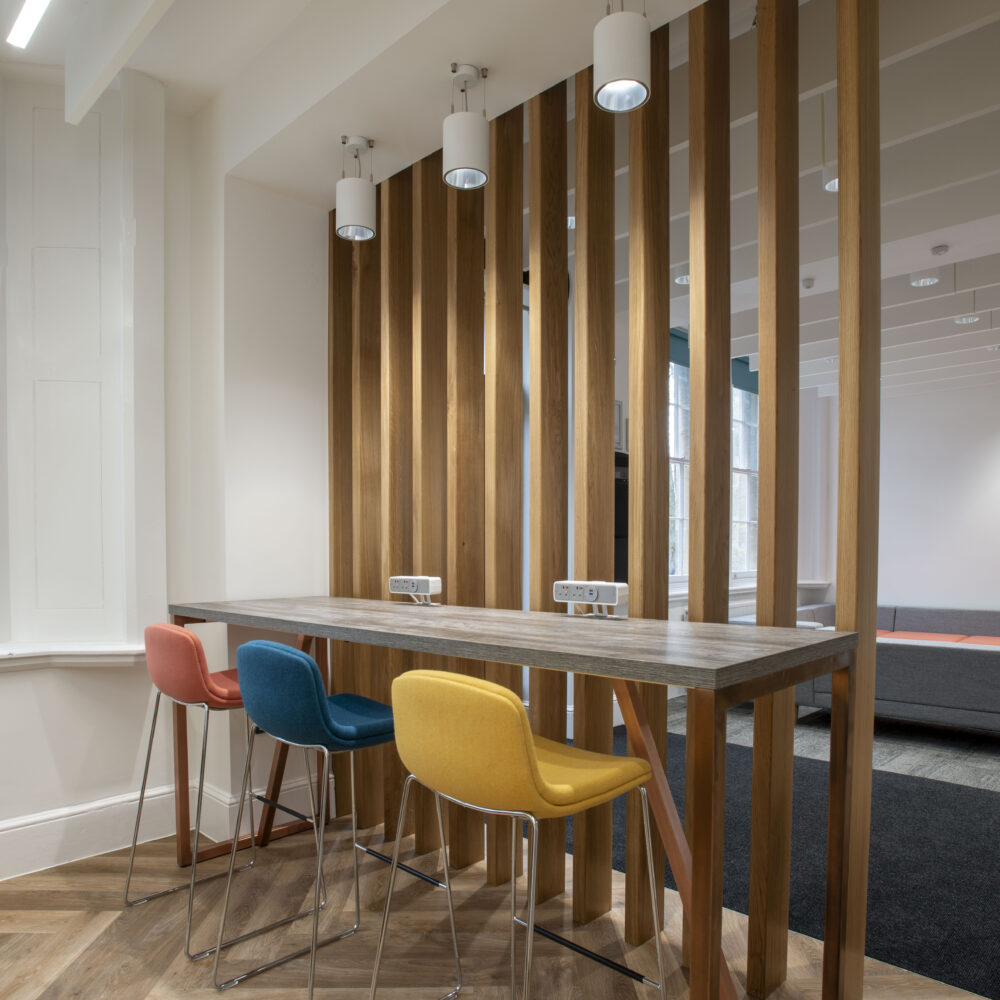 How to Reach Net-Zero Carbon

To reduce the carbon footprint of our buildings, we need to focus on embodied carbon. Simon Beaumont-Orr explains why.