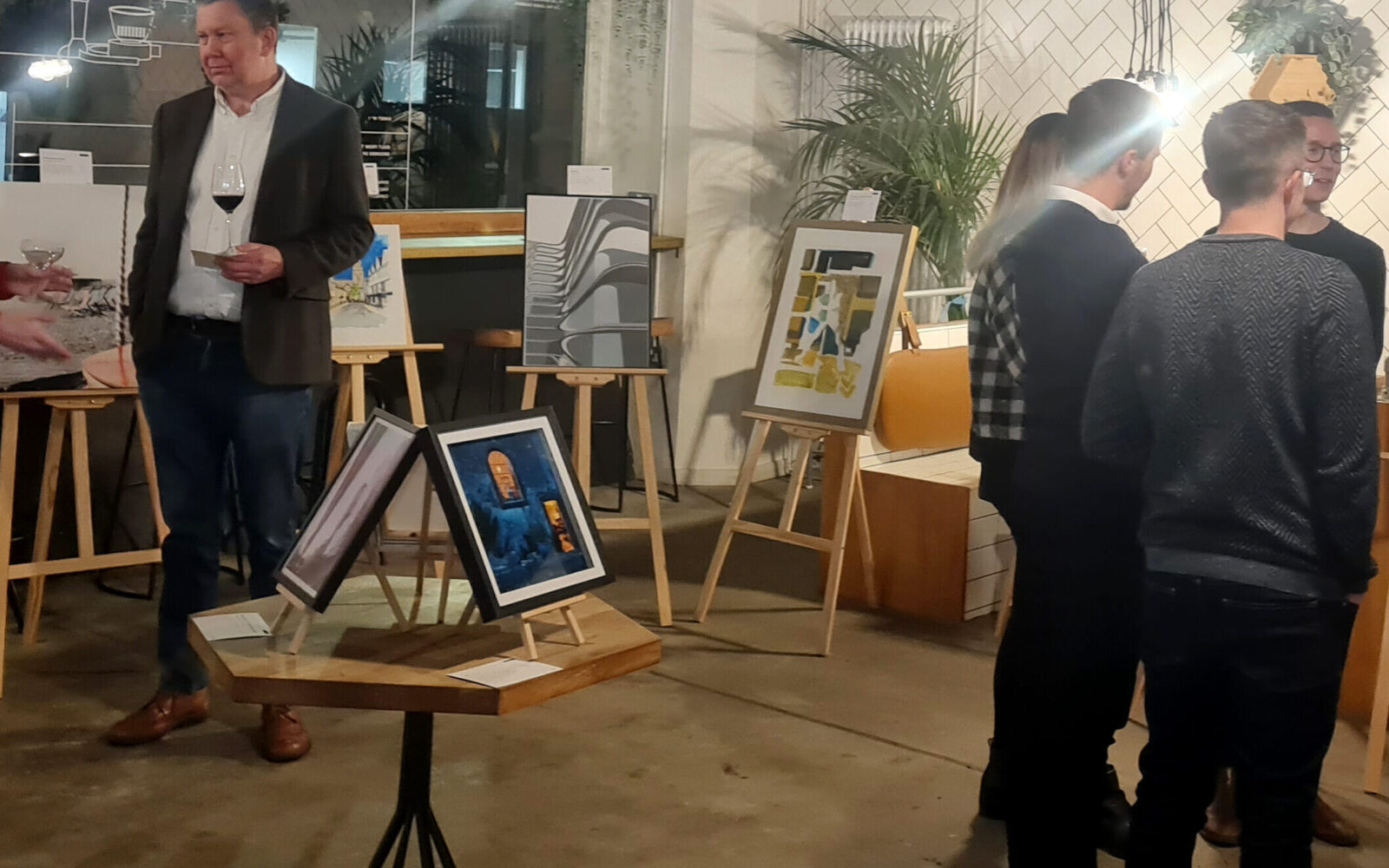 Our annual art challenge returned for its fourth year in 2021. With a record number of entries, we had submissions kindly donated by our talented staff from all of our eight studios.

We hosted an exhibition in Manchester, with an online art auction running alongside to raise money for two charities close to our heart – Marudyan (providing education to below poverty line children in India) and Macmillan Cancer Support. We’re still calculating the exact total but it’s looking like we’ve raised around £1,800 from the auction and raffle.

As well as raising money for charity, the art challenge is a competition with a top prize of £500. The brief this year was ‘the art of architecture, transforming the everyday role of the architecture into art.’

1st place position – the Roger FitzGerald prize (named after ADP Fellow who acted as one of our judges and founded the challenge in 2018 )- went to Manchester architect Alex MacBeth. Alex describes his unique piece as “an abstraction of its name sake by David Bowie, the feather-like image is a visualisation of the different sound waves throughout the song ‘Thru’ these Architects eyes’. Each strand represents a different audio frequency, growing, twisting and distorting based on the rises and falls in amplitude as the song progresses to create a pattern unique to the song.”

The judges said: “Simply an exquisitely beautifully and elegant image derived from a digital process, frankly beyond the knowledge of the judges.”

In 2nd place was a vibrant illustration by our Healthcare director Chris Thornton called Anything and Everything. And in 3rd place, another Manchester architect Kristian Abrahamsen with his stunning drawing of the Manchester Skyline.

There were also two submissions that were commended by the judges – Tom White, impact and comms executive who submitted a skilful concrete poem and Ben Wallis Oxford associate director for his beautifully composed photo .

We’d like to say a huge thank you to everyone involved and we look forward to next year! 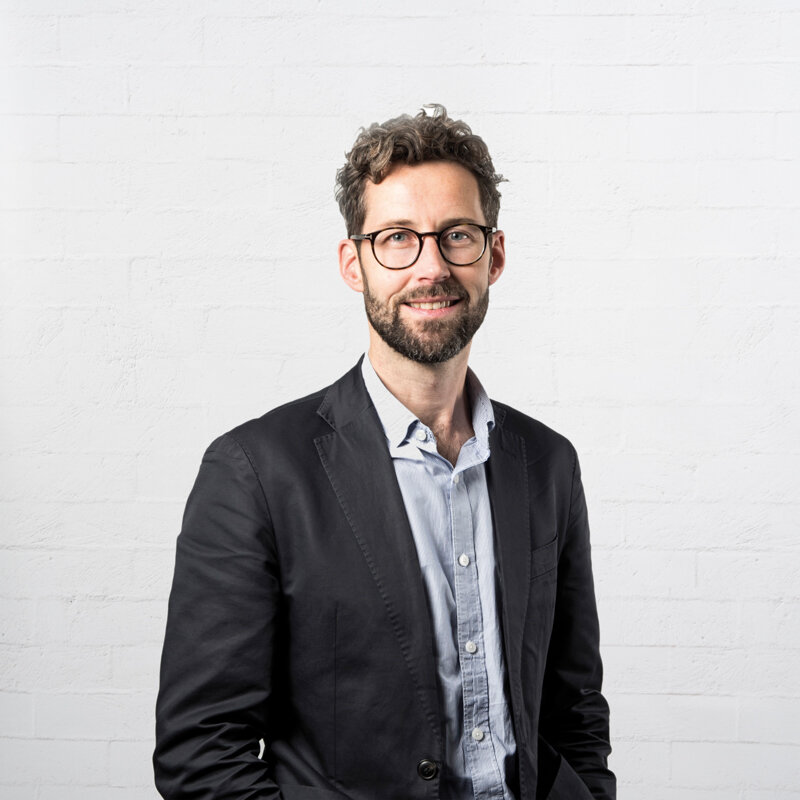 Joe is our creative director with responsibility for design quality across the practice, covering sustainability, technical and quality management.

He has 20 years’ experience across a wide range of sectors, including workplace, education, research, healthcare and leisure. He has led a number of award-winning schemes, winning a national RIBA award, and has delivered significant masterplans.

Outside of work he enjoys rugby league and exploring the Lake District with his family. A keen runner, he aspires to run a sub-three-hour marathon – no harm in being ambitious! 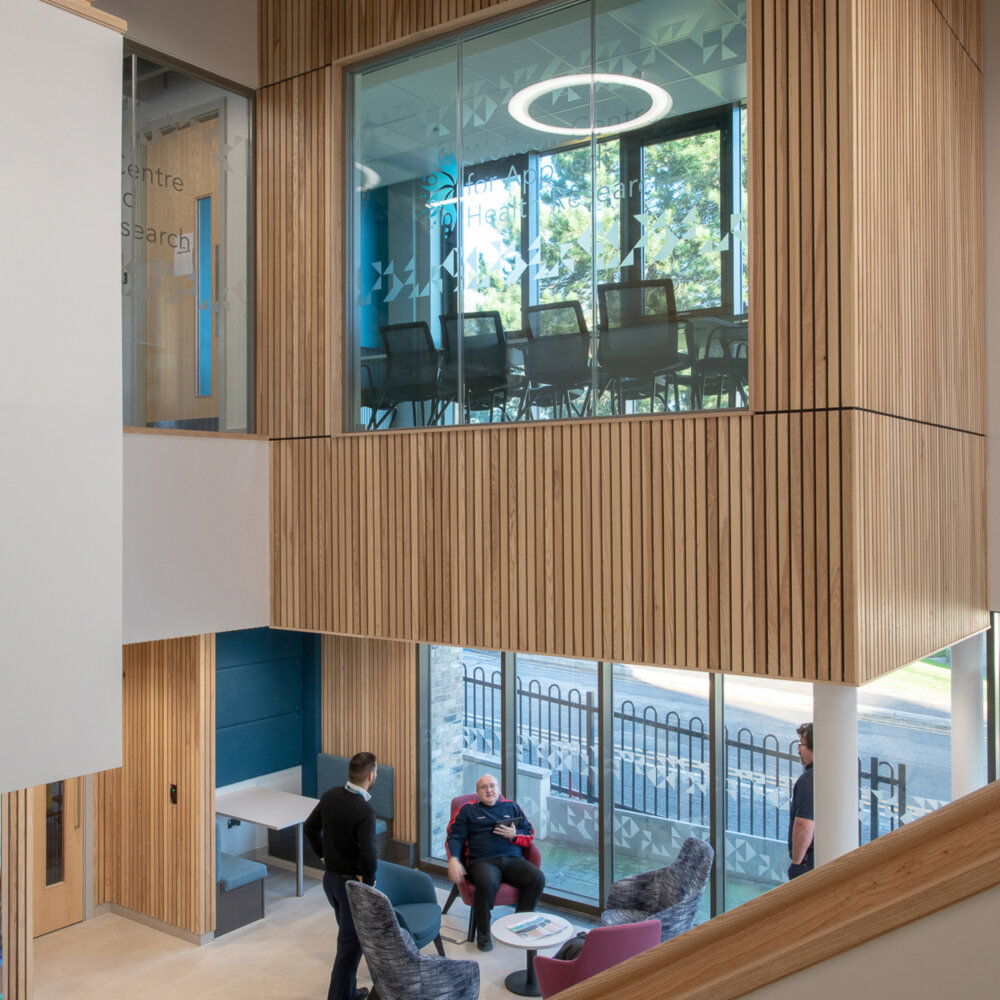 Wolfson Centre for Applied Health Research: A home for collaborative research in the heart of Bradford

The Wolfson Centre for Applied Health Research is a new home for public health research in Bradford. As a city, Bradford faces a number of public health challenges – so it seemed the ideal location to build a new facility that would use collaboration to tackle those challenges. 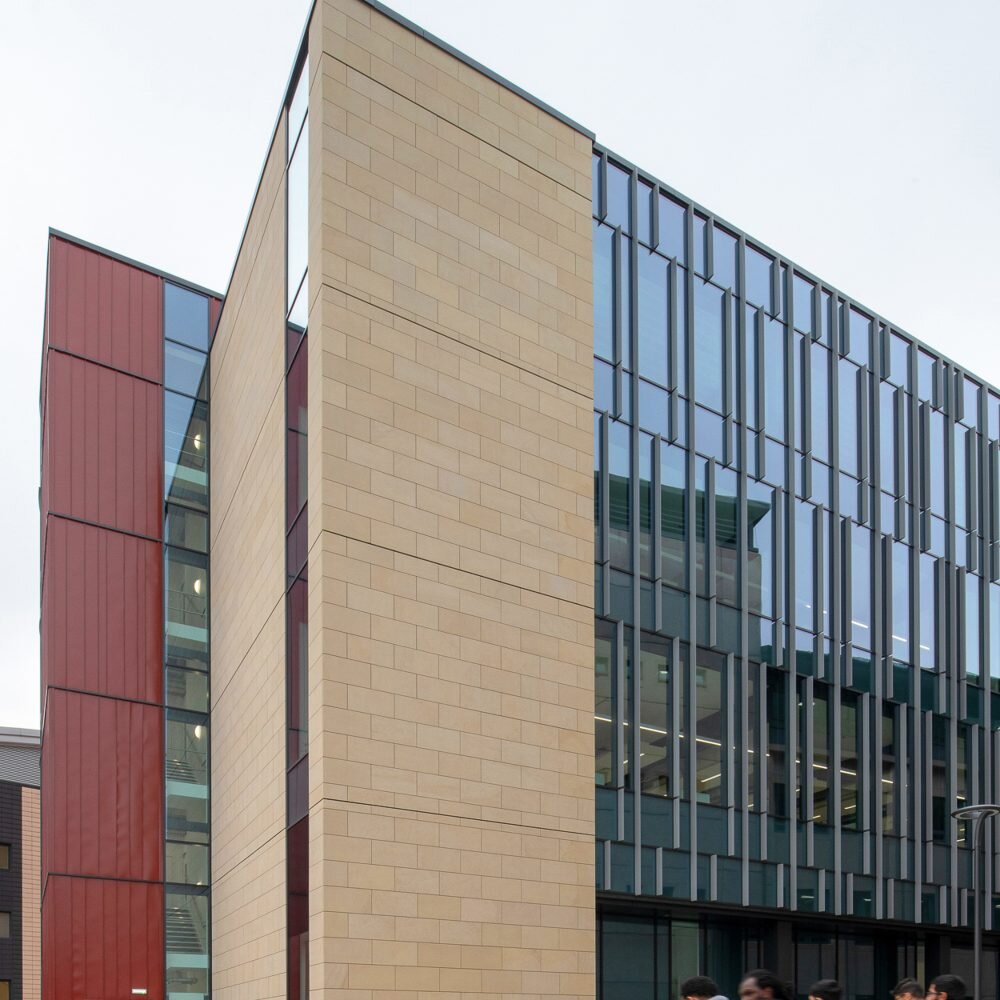 The University of Huddersfield’s first project through their current consultant framework is this gamechanging extension to the Joseph Priestley Building, which has allowed the University to teach science in a wholly new way. The building would challenge “siloed” approaches to learning and research – both fostering collaboration between students and researchers of different disciplines, and […] 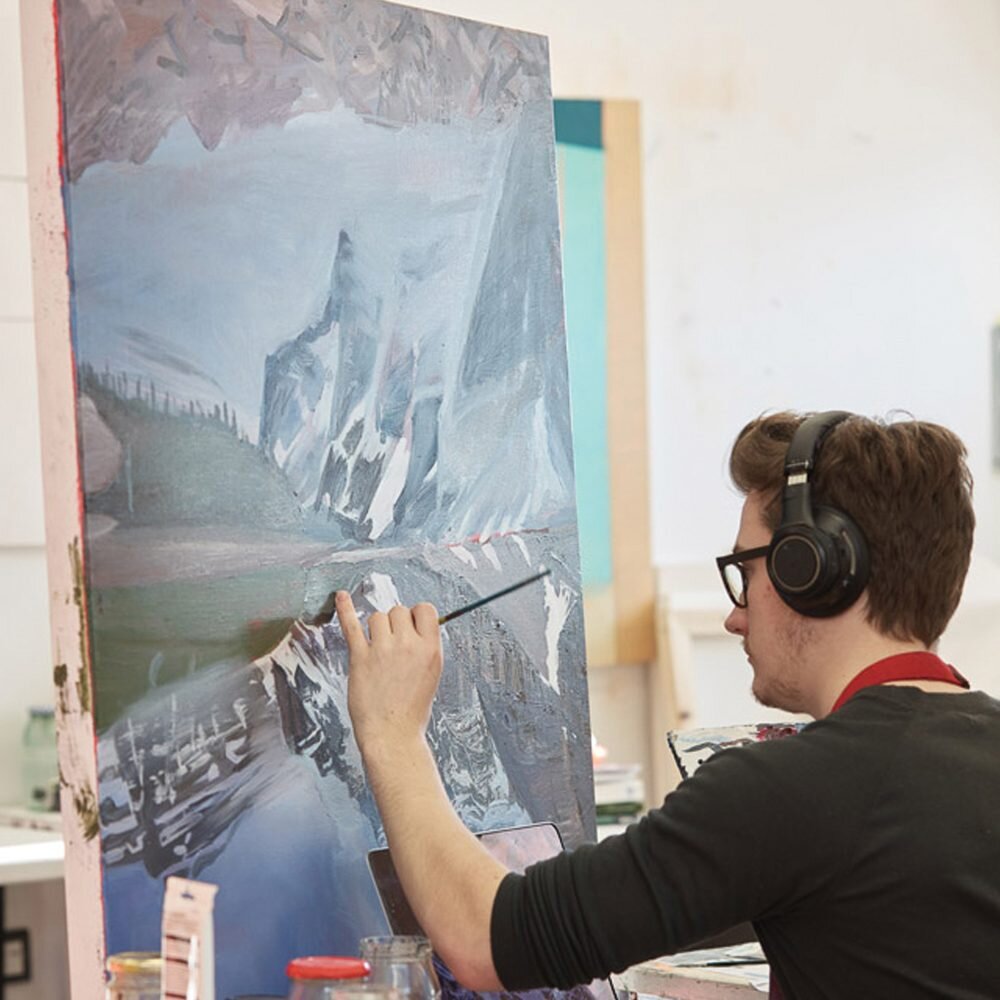 School of Fine Art, History of Art and Cultural Studies: A “triumph of design” in a historic setting

The School of Fine Art, History of Art and Cultural Studies (FAHACS) at the University of Leeds was spread across campus, and they came to us with the challenge of bringing the school together within a single building. 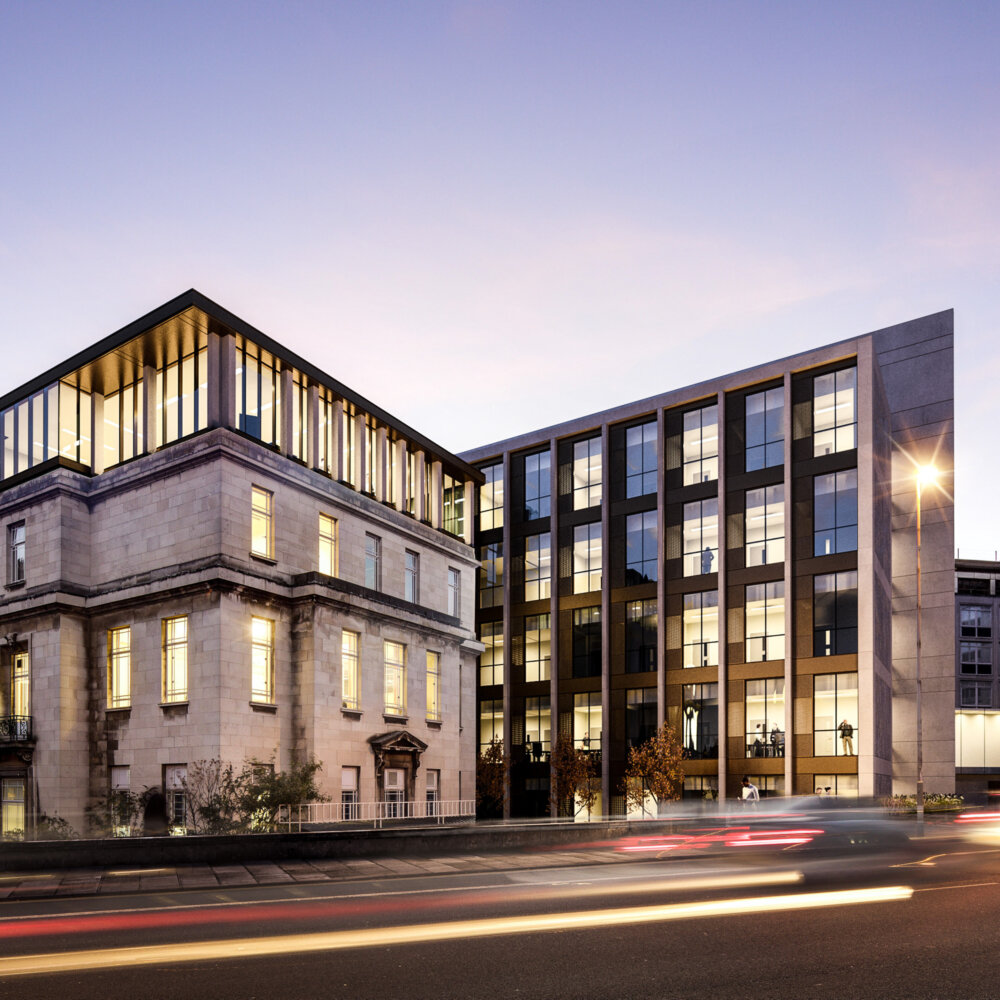 The Sir William Henry Bragg Building: Changing the way we think about research

The Sir William Henry Bragg Building is the largest single investment in the University of Leeds’ history. Its origins lie in our masterplan for the University, where we identified several key science facilities that were no longer fit for purpose. Instead of redesigning each facility, the Bragg Building brings together the Faculty of Engineering and […] 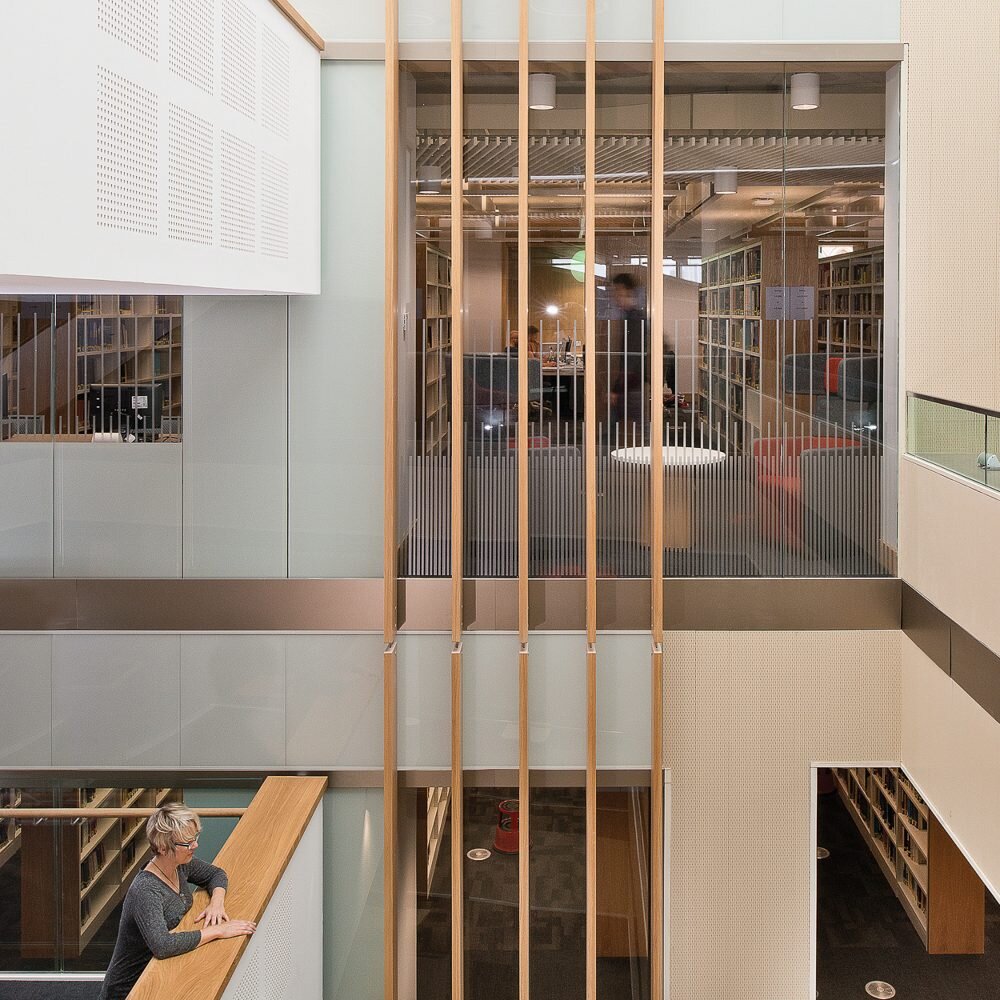 The Laidlaw Library: A landmark library on a challenging site

A new library is always a milestone in the life of a university. The Laidlaw Library was no exception: nestled between two Grade II listed churches in a busy, city-centre campus, the site needed to house 4000m2 of learning and library resources, with 1000 reader seats and 6,800 linear metres of book stock. 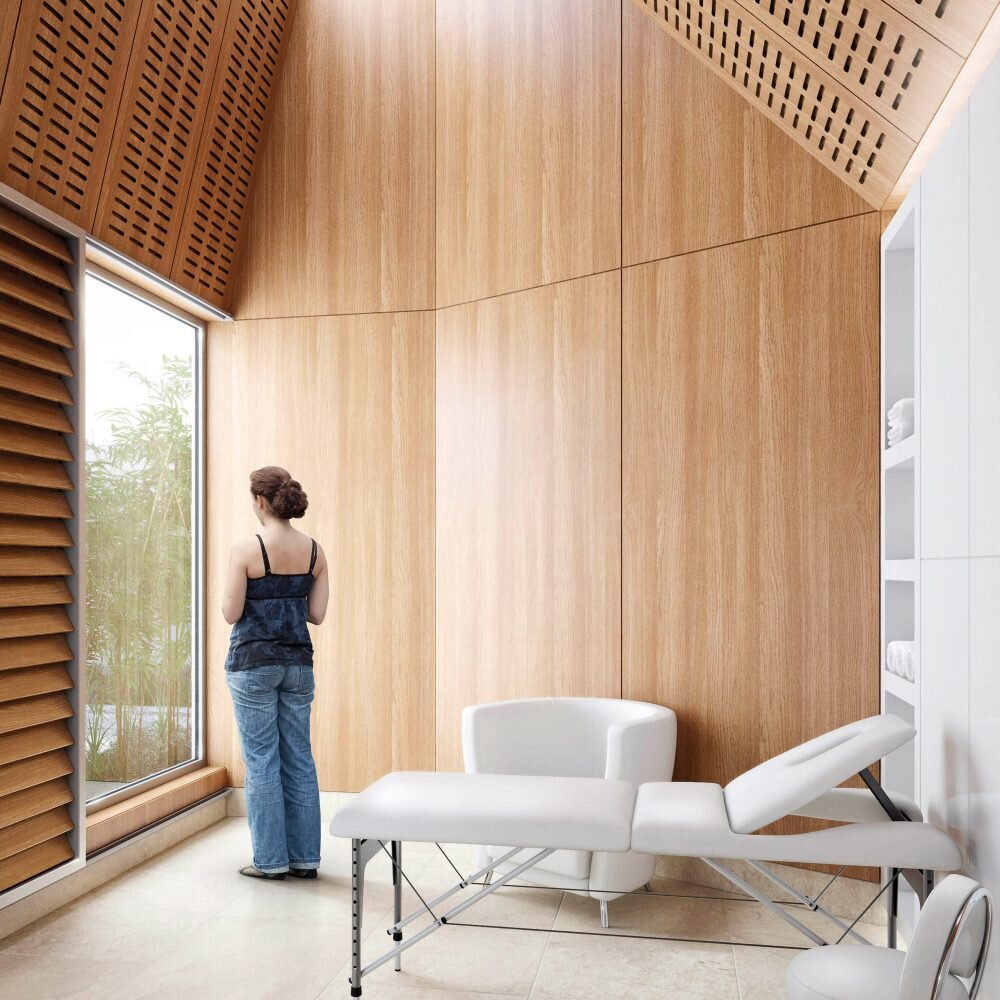 We’ve completed a wide range of projects for Macmillan Cancer Support, but each one brings its own unique challenges and opportunities. In the late nineties we designed the oncology and therapies centre at Halton General Hospital – around 15 years later, the centre’s success led Macmillan to approach us again, this time to expand the […] 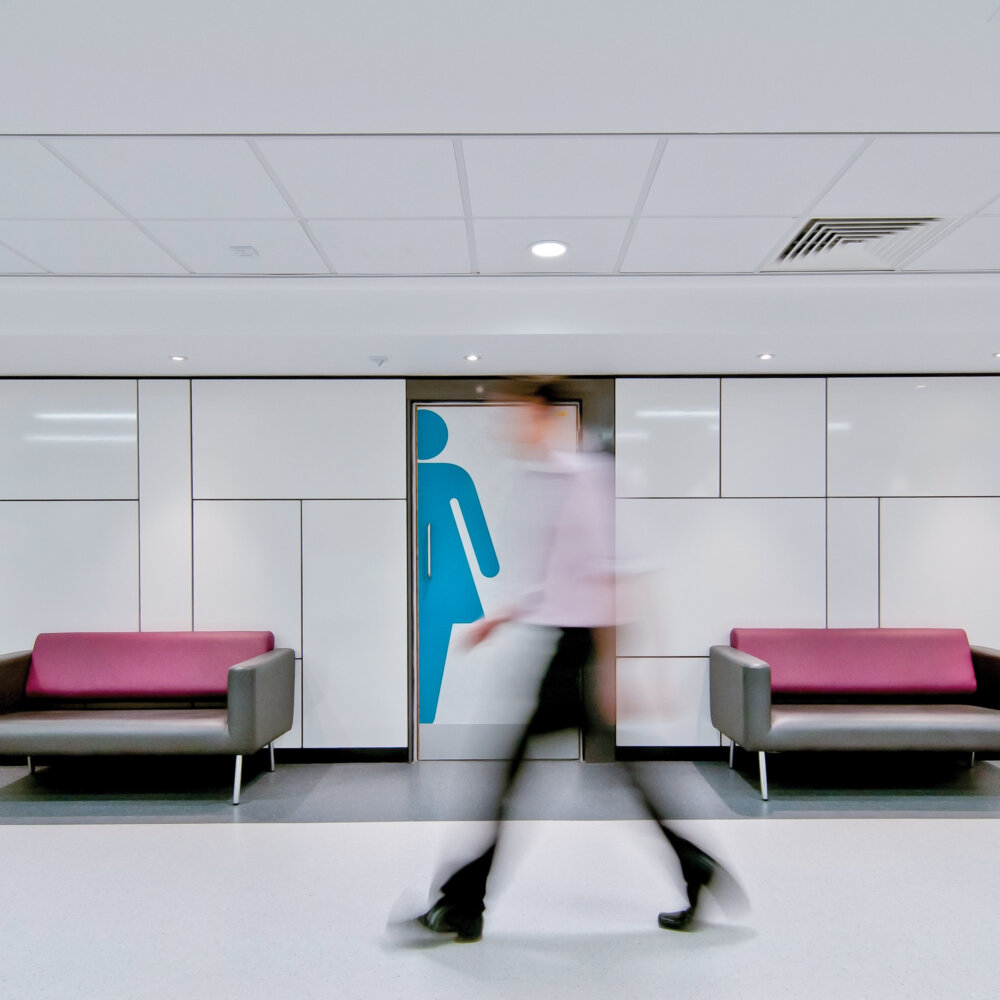 Salford Royal Hospital: A decade of improving the patient experience

We’ve developed a close relationship with the Salford Royal Hospital over the past decade, working on eight separate projects there. This has involved various challenges – from creating a new heart care facility to refurbishing the outpatients’ reception.